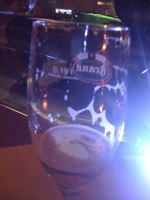 More and more frequently reports about beer fraud (Dutch) are coming in. Supposedly, bar owners buy cheap no name beer and sell it under the name of brands like Heineken or Brand. As the story goes, the pubs will buy kegs of cheap beer and hook them up to the taps of contracted brand beers.

While this is certainly hard to verify, it seems plausible. The large beer brands in the Netherlands have been raising prices frequently and aggressively, with the average cost of a 50 liter keg rising from € 90 to € 100 in just the last year. And where pub owners used to be able to pass the raises on to consumers or reduce the size of a regular beer, this has become increasingly more difficult.

Expectantly, cheaper beers like horecabier are entering the market aggressively claiming that generally Dutch pilsner beers are very much alike in flavor and therefore hard to distinguish by drinkers.

3 thoughts on “Beer Fraud in Amsterdam”