Last week was the summer edition of Restaurant Week in Amsterdam. During restaurant week you can sample a three course dinner for EUR 25,= at any of the more than 500 participating restaurants. If you are quick enough, that is, as their server traditionally grinds to a halt due to the enormous traffic by people trying to reserve a table.

I subscribe to Dining City Amsterdam, which means an opportunity to reserve a table for restaurant week a few days in advance. The idea behind restaurant week is to try new restaurants and we managed to score tables at Tante Agaath and Heerlijk – both in the Jordaan and both new to us.

Both Tante Agaath and Heerlijk are examples of how restaurants should *not* do restaurant week. Menus were boring with a limited number of rather simple choices. I guess it’s partially understandable as restaurants need to deal with larger than usual number of guests and a limited budget. But to me the idea was to attract new guests in the future by luring them in for the first time during restaurant week. And then having them return because they liked it. 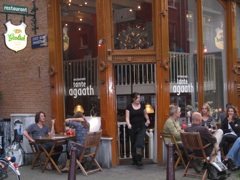 Tante Agaath was clearly the better of the two. Service was prompt and friendly – much unlike what was said in some reviews that criticized the service of Agaath. The starters we ordered were a trio of fish with salmon, shrimp and scallops; and paté. The scallops were the best part. The paté was ok although unfortunately off-the-shelf stuff. My main course was an entrecôte that was significantly past the medium-rare I had ordered. It’s actually amazing how few restaurants get this right. The profiteroles for dessert were good.

The wine list at Tante Agaath was short but decent. We went with a fresh Viognier that was quickly finished. Tap water was served chilled and without having to ask for it.

Heerlijk was downright disappointing. We had made our reservation for 20:00, showed up on time, were seated promptly and still did not have starters before 21:30 – an hour and a half later. The menu was terribly boring – we settled for shrimp cocktail and salad with smoked duck for starters; dorado and lamb fillets – served with the same potatoes and veggies – where the third option was also rather standard lemon chicken; and cheesecake for dessert.

While scoring low on imagination, Heerlijk does get credit for execution. The duck cooked just right, still pink. The dorado was flavorful. And the lamb was tender. The wine list was so limited, I settled for the house wine, an OK Valpolicella. Expensive bottled water is served only – no tap. The espresso afterwards was not hot enough and tasted slightly stale – and to top it all I had to get sugar myself from a neighboring table.

We definitely won’t be back to Heerlijk. We might go back to Tante Agaath if we happen to be in the area. And while I had marked restaurant week in my agenda the last two times, I will probably skip the next one!