We mostly write about restaurants and food, but we’re sure all foodies will appreciate this gem in the heart of De Pijp, near the Albert Cuyp Market.

Duikelman is somewhat of a kitchen supply institution in Amsterdam, sporting an enormous collection of anything a chef would need in a charmingly packed store. 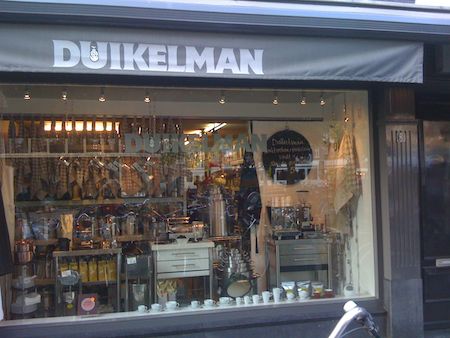 Duikelman has an amazing selection of kitchen supplies. In the main store, you will find anything from pots and pans, knives, books, food processors, espresso makers, ovenware, cutting boards to anything else required for your next cooking adventure. In each category, Duikelman has a great range of options from simple to professional, along with knowledgeable staff to help you make a choice. In a more recently opened second store across the street, Duikelman also has a great range of kitchen appliances with a focus on fancy professional equipment.

It’s quite amazing how much supply they manage to stock in their rather small store. You will understand how they do it as soon as you enter. The aisles are narrow and the shelves filled with supplies from floor to ceiling. The shop kind of meanders on, occupying additional space in the neighboring buildings and continuing much further towards the back than you would imagine.

It might take some patience and high tolerance for crowds, but Duikelman Amsterdam certainly is great fun to explore! 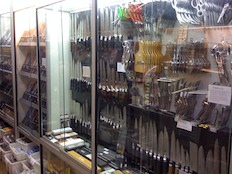 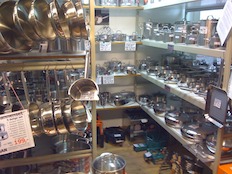 Sous-Vide – or under vacuum – is the latest rage in cooking techniques. Sous-vide cooking involves sealing the ingredients in an airtight plastic bag and cooking them for extended amounts of time at temperatures well below boiling. The intention of sous-vide cooking is to preserve the flavors and aromas of the ingredients and to heat them up equally, e.g. to prepare meat that is perfectly medium-rare everywhere.

Michelin decorated chefs like Bocuse or Robichon have been using the technique for many years but it never entered private use because of complexity, high cost of equipment and safety concerns. Reading the excellent practical guide to sous vide cooking practically requires a science degree to successfully navigate the government pasteurization tables and decipher the mathematics of sous-vide. And in a recent Wired Magazine I read how former Microsoft CTO Nathan Myhrvold was spearheading efforts to make sous-vide accessible for hobby chefs.

Essentially sous-vide requires two pieces of equipment: a vacuum food sealer and some device for controlling temperature accurately over long periods of time. Vacuum food sealers are easy to find and have been used by private households for sealing and storing foods for a while. But finding a temperature regulator remains difficult.

Wired recommends an Auber temperature controller that looks more like laboratory equipment than cooking device. It has a thermometer to measure the temperature and switches electricity on and off to maintain constant temperature. You can use it with a rice cooker by plugging the cooker into the outlet of the controller. Alternatively, German control instrument manufacturer Julabo has a whole range of sous-vide equipment that might be usable in your kitchen but clearly looks aimed at the professional market. On kookforum.nl user Maurits on made a list of alternatives including slow-cookers and second hand lab equipment that leaves much to be desired.

It’s very tempting to try out sous-vide. But given the cost and complexity of the equipment, I will continue to rely on professionals to prepare sous-vide food for me for now!

The Foodloversguide NL, a directory of the best food addresses in the Netherlands, was published a few weeks ago. The 320 page paperback contains lots of mouthwatering photos and more than 400 suggestions for foodies looking for the best restaurants and butchers, bakers and candlestick makers in the Netherlands. The Foodloversguide was published by Mo’Media, is written in Dutch and will set you back € 17,95.

I first read about the guide on Mevrouw Gerritsen blog. Turns out that it has been put together by a group of Dutch food writers and journalists, including bloggers Mrs Gerritsen and Petra de Hamer. Other than a few photos of sample pages and the usual marketing blurb, I could not find much information about the guide online. So I decided to order it and share my thoughts with you.

First thing to note is that the guide is written in Dutch, although I would say that basic knowledge of the language is sufficient given the many photos and its address book format. And as an additional benefit of ordering it in spite of the language barrier, you might pick up just enough foodie Dutch from it to bluff your way around Amsterdam’s food scene.

Also be aware that it’s a guide for the entire Netherlands. You may be disappointed if your center of the universe – like mine – is Amsterdam, and you rarely venture out to hard to pronounce places like Middenbeemster, Oosthuizen and Zuid-Scharwoude, let alone anywhere beyond the borders of North Holland.

The section on North Holland has several editorials on organic meat and bio fruits and vegetables. Along with the descriptions there are addresses of butcher shops, farms and markets where you can acquire the produce; some of them in Amsterdam.

There also are sections on cheese, bookshops and kitchen supply stores, which for example includes a good description of the authority in Amsterdam, Duikelman on Ferdinand Bolstraat.

Another feature of the Foodloversguide are best-of-lists. Among others, you will find the top 5 lunch places of Amsterdam, including my favorite Small World Catering on Binnenoranjestraat; a list of who makes the freshest bread with amongst others recently opened French franchise Le Fournil de Sebastian on Olympiaplein; or an overview of the Amsterdam Noordermarkt and other farmer’s markets.

The restaurants included in the guide seem to be the ones that purchase their ingredients from the food producers listed in other sections. For Amsterdammers, the guide recommends well-known high-end restaurants Le Garage, De Kas, and Altmann. I found two restaurants that I have not yet been to: Stylish and set menu only Beddington’s on Utrechtsedwarsstraat and A la Ferme, ominously themed after Matisse’s “luxe, calme et volupté” on Govert Flinckstraat. Neither would be high on my want-to-go list because – at least on first sight – they seem to put too much focus on appearance.

Overall the Foodloversguide NL is a visually pleasing food directory with many useful addresses. Personally, I find it too broad with its focus on the entire Netherlands and everything from far out eco farms to urban kitchen stores and from basic ingredients to high-end dining. I do think it’ll make for a nice christmas gift and will be useful for newbies who like to roam around.

I love using Emile Henry dishes and have written about them before. They are great for cooking in the oven. They never stick, are easy to clean and get along well with ovens, microwaves, freezers and dishwashers. And they look great with their classic clean design.

The other day I needed a wedding gift for a couple that likes cooking and decided to give them a few Emile Henry dishes – I was thinking a few different sizes of oven dishes and also some more specific earthenware for quiche, lasagna or pie. So I was looking for a store in Amsterdam with a large selection of Emile Henry dishes in stock and knowledgeable service.

Through Emile Henry I got in touch with their Dutch distributor Interhal who were nice enough to send me a list of all shops in Amsterdam that carry Emile Henry.

Outside of the Bijenkorf – a large and touristy department store on the Dam – there are two great kitchen stores with a large selection: Deksels in the Jordaan on Haarlemmerdijk 129 and Duikelman in de Pijp on Ferdinand Bolstraat 68.

Duikelman is some sort of bare bones kitchen supply heaven. It looks more like a warehouse with simple shelves stocked to the max. It’s always packed and you will need to squeeze through lots of people in the narrow aisles. Their selection is just amazing – you will find everything from the sharpest knives to the shiniest espressos makers and from massive gas stoves to little jars for herbs and spices.

Deksels is smaller and caters more to people looking for quality kitchen gifts. It blends perfectly with the other boutique stores on Haarlemmerstraat and besides Emile Henry focuses on brands like Le Creuset and Cuisinart. I went with Deksels this time and they made a beautifully wrapped gift for the wedding.