Today I am very happy to present the first guest post on dutchgrub.

The post is by Andy, a tech entrepreneur currently living in the Hague.  He hails from Nieuw Amsterdam, better known as New York City.  When he’s not writing code, he enjoys cooking and tasting food from around the world.  In fact there’s nothing he won’t eat.  Except for bitterballen (really, what is in that?).  His current project is Sensobi.com.

Last night I had the best meal I’ve had since moving to the Hague.  It was a cold and snowy night which kept a lot of diners in, and we wanted to go somewhere close to home.  Luckily we live near a nice stretch of restaurants mentioned in the Michelin Guide.  On a less busy corner of this street sits Choix du Chef, a restaurant I have been curious to try for about a year.  The reason: the premise of the restaurant is that there is no printed menu.  Instead, you choose between one to six courses at the start of the meal, and then you wait in anticipation for the chef’s selection that night. 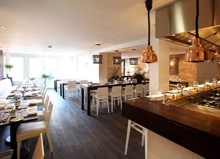 Right from the start, we knew that this restaurant was unlike any we had ever been to in the Hague; the service was extremely attentive. They seemed genuinely happy to see us there.  Their well-curated wine list is supplied by de Gouden Ton; I knew this because the jovial diners seated next to us happened to run the store.

The first course was a house-made smoked salmon, served with a relish of diced daikon radish and Jerusalem artichoke coulis.  The salmon was lightly smoked, so it sat somewhere between cured and raw, imparting both the silky texture of raw fish and the savory flavor of the smoke.

The second course was a medley of grilled quail, served atop a moussaline of potato, something called “Dutch cabbage,” and pureed beets.  The meat of the bird was tender – even the breast had an airy quality to it.  In France or New York, technique of this kind would be expected for a fine-dining establishment.  But here in the Hague, in a restaurant on a hidden back street, it was nothing short of delightful.

After living in New York for a decade, adjusting to the dining scene here has not always been easy, though there are certainly bright spots.  To know that a restaurant such as Choix du Chef exists in my new city (so close to home no less) gives me hope that there is more to discover in the coming year.  Eet smakelijk!